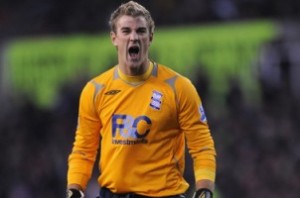 Brum boss Alex McLeish has been told that the keeper will be returning to Eastlands at the end of this season.

However, McLeish has not ruled out signing the England international for another year when his loan expires in the summer.

McLeish told reporters that Manchester City will be taking Joe Hart back at the end of the season and that there is no chance of Birmingham signing the keeper in January.

McLeish also revealed that Birmingham have asked the question and Manchester City has said that the deal will never happen. He added that it is Manchester City’s policy and that it was always the game-plan.

He went on to say that Manchester City will be putting in an active policy of young players in place as well as bringing in the big names.

Zabaleta Slams Welbeck : I Could Have Broken My Leg!

Kolo Toure : Robin van Persie Will Be A Great Signing For Man City!