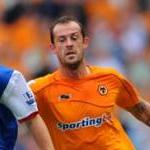 Wolves came from behind to beat Blackburn Rovers 2-1 at Ewood Park in their first game of the 2011-12 Premier League season.

Goals from Steven Fletcher and Stephen Ward cancelled out Mauro Formica’s early goal as Wolves battled from behind to secure all three points.

With a number of absentees at the back, Blackburn were forced into fielding a makeshift defence which included midfielder Steven Nzonzi filling in at centre back.