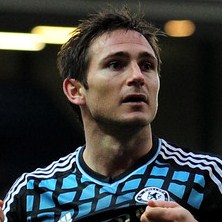 Chelsea stopped the rot after a second-half goal from Frank Lampard gave them a 1-0 win at Blackburn Rovers in a fraught match at Ewood Park that was marked by yet another howler from misfiring striker Fernando Torres.

In-form midfielder Lampard scored with a diving header from Branislav Ivanovic’s cross on 51 minutes but Rovers had some great late chances before Torres put in his now customary miss as the Blues scraped out their first win after their 5-3 defeat to Arsenal.

On the overall balance of play the Blues deserved victory, but Rovers battled gamely despite all their problems and the home side created some big opportunities, only denied by poor finishing, the woodwork and the frame of Petr Cech.

The context of the match made both sides a tad nervous: Rovers were lying third bottom at the start of play, with the club having to convince fans to hold fire on their weekly protests at under-fire manager Steve Kean.

Chelsea, meanwhile, had followed defeat to Arsenal with a tepid Champions League draw at Genk, all in the context of an ongoing FA and police investigation into captain John Terry’s alleged racial abuse of Anton Ferdinand in the 1-0 defeat to QPR.