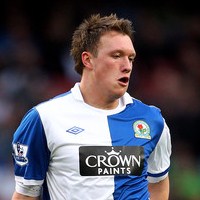 Blackburn manager Steve Kean has declared that promising defender Phil Jones will not leave the club for anything less than a massive fee.

The likes of Arsenal, Manchester United and Liverpool are believed to be showing considerable interest in the 18-year old centre-half but the Rovers have assured fans that if Jones does happen to depart Ewood Park it will be a for a hefty sum.

Kean said : “It’s going to be difficult for Phil but we are confident. This is where he started, where he got his first chance and we believe we have rewarded him very well,”.

“He wants to play as high up the league as everybody else does and he’s a star in the making.

“He’s on a five-year contract and if we can sit down at the end of the season and discuss what players we are trying to bring into the club then hopefully we can keep the big hitters away.

“We want to sit down with all the younger ones and explain what we want to do as a club over the next two, three or four years and if they stay with us they are going to part of that story.

“If they decide they want to move on then the clubs concerned will have to pay top dollar because they are under very, very long contracts and the fees we would be demanding would be massive.”