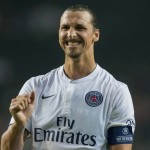 The 33 year old Sweden international was caught up in the power struggle between pair while he was at Ajax – where Van Gaal was technical director with Koeman manager of the Eredivisie club.

The Swede says the bust up between the two Dutchmen was sparked by Van Gaal’s insistence that Ibrahimovic should only be used in Champions League matches as Ajax were coasting in the league.

Speaking the Sun on Sunday, Ibrahimovic said: “Koeman went mad. He was furious at Van Gaal.

“He felt that statement meant his hands were tied and limited his chances to fight for me.”