Blame the players not Wenger – Wilshere 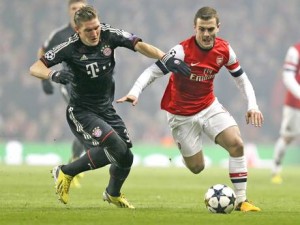 The Gunners were up against it when Toni Kroos opened the scoring in the seventh minute and they were two down in the 21st when Thomas Muller pounced on poor defending to stab home.

Arsenal were booed off at half-time and responded at the start of the second half with a header from Lukas Podolski narrowing the deficit against his former club.

But after substitute Olivier Giroud fired a great chance straight at Bayern keeper Manuel Neuer from point-blank range, the Germans cut through the home side again on 77 minutes as Mario Mandzukic restored their two-goal advantage.

‘I don’t think it’s anything to do with the manager,’ Wilshere told ITV1. ‘He puts us on the pitch, it’s down to us to perform and get the best out of us every week and a manager can put us on the pitch and motivate us but we have to do it when we’re on the pitch and at the moment we’re starting badly and getting punished for it.
‘I think the players will take responsibility, we’re man enough to take it. The boss has been here for 16 years and he’s been doing a great job so you can’t question him.’