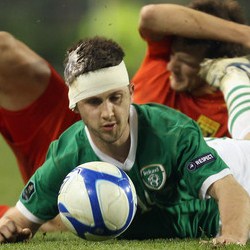 This incedent happened during the UEFA EURO 2012 Group B Qualifier between Republic of Ireland and Macedonia at the Aviva Stadium on March 26, 2011 in Dublin, Ireland.

Macedonia defender Boban Grncharov went in a high tackle on Shane Long of Republic of Ireland which struck the head of the Reading striker.

Boban Grncharov was shown the yellow card while Shane Long required treatment and had to be patched up for the rest of the game.

Makes you wonder why players do the things they do sometimes. Check it out.