Reports are out claiming that Stoke City striker Bojan Krkic has recalled the first time he met Arsenal legend Thierry Henry at Barcelona. 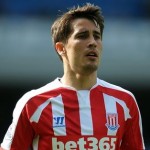 The French icon hadn’t been at the Nou Camp long before realising the levels of adulation and pressure in Catalonia were on a totally different scale to anywhere else.

“Thierry said in England it was easy, the people never came to the training ground and the journalists only visited once a week. At Barcelona, there are five thousand people at training every day, television crews filming you every day. It’s totally different.”

Bojan adds: “I grew up at Barcelona in one of the golden ages with the best players in the world. Every day we learned with the ball, and that was critical.

“But when you play with a big club, you need to get results every single day, even more when you come from the house (homegrown). It’s not easy.”