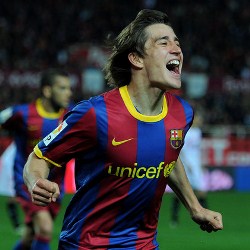 Transfer news from the Spanish League is out and it has been revealed that Barcelona striker Bojan Krkic has attracted the interest of Italian side AS Roma.

It is said that newly appointed Roma coach Luis Enrique could raid his former club for the young striker.

“I’ll look to work with the best players, those who I will find in Rome and those who I’ll be able to bring with me from Barcelona,” he stated.

Reports have surfaced in recent weeks that Bojan is to be offered to Udinese in exchange for winger Alexis Sanchez.

“I will do everything possible to continue playing for Barcelona.

“Nobody told me that I would be just a player to be exchanged. Nobody likes to be a part of that situation, especially not me.”

Chelsea Closing In On AS Roma Defender Philippe Mexes