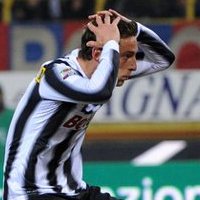 Mirko Vucinic earned Juventus a 1-1 draw with Bologna at Stadio Renato Dall’Ara – but it was not enough to bring them level with AC Milan at the top of Serie A.

Juventus remain two points adrift of Milan at the summit of Serie A after 26 games, but will probably be happy to escape from Bologna with a draw having ended the game with 10 men after Leonardo Bonucci was sent off on 82 minutes for receiving a second yellow card after taking out Gaston Ramirez.

The home side grabbed the lead when Marco Di Vaio darted through the middle to slip the ball beyond Juventus goalkeeper Gianluigi Buffon with their first real attack of the match on 17 minutes.

Juventus were toiling to break down Bologna, but finally found a way to goal when Vucinic collected a lovely ball from Andrea Pirlo to score on 59 minutes as Bologna keeper Jean Francois Gillet raced off his line.

Juventus manager Antonio Conte was sent to the stands after complaining to the fourth official during the second period. Juventus are still unbeaten in the league from 26 games, but have drawn 13 of those fixtures.