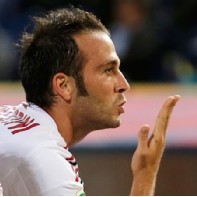 Giampaolo Pazzini scored a hat-trick on his AC Milan debut to earn the Rossoneri all three points from their trip to Bologna.

The former Inter Milan striker opened the scoring from the penalty spot in the 16th minute, but the Rossoblu responded well with Alessandro Diamanti scoring a deserved equaliser from the spot on 42 minutes.

But Pazzini wrapped up victory with two goals in eight minutes towards the end of the match at the Stadio Renato Dall’Ara.