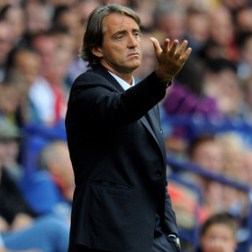 Manchester City secured top spot in the Premier League as they turned on the style in somewhat uncharacteristic fashion to defeat Bolton Wanderers 3-2 at the Reebok Stadium.

Accused of being too negative at regular intervals last season, Roberto Mancini and his City side refused to conform to stereotype as they showcased their deep reserves of attacking talent, with David Silva excelling and scoring the opening goal with the help of a shocking error from Jussi Jaaskelainen.

Though Ivan Klasnic responded with a fine goal, a wonderful strike from Gareth Barry and a neat finish from the impressive Edin Dzeko put City in firm control before Kevin Davies pulled one back after 63 minutes. A close scoreline, but their performance made a real statement about City’s ambition this season. David Silva Out Of Man Utd Clash With Knee Injury