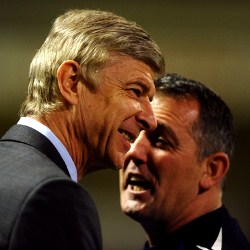 Arsenal missed the chance to close the gap on the Premier League’s top four after being held to a goalless draw which gave Bolton another priceless point in their relegation battle.

The Gunners dominated proceedings at the Reebok Stadium with Robin van Persie twice being denied by the woodwork but they failed to take a number of other chances.

With Newcastle beating Blackburn it meant Arsene Wenger’s side dropped to seventh in the table, while Wanderers, still just above the drop zone, edged two points ahead of Rovers.

Arsenal have now taken just one point from their last three away matches, although they marginally improved on their defeat at the Reebok last season.

After earning six points from a possible nine in January Owen Coyle’s side are playing with confidence and recorded their first clean sheet in 12 league matches dating back to November.

That was partly down to Arsenal’s failure to take advantage of their dominance, particularly early on, and partly to the frame of the goal in front of the travelling support.