Reports are out claiming that Bolton Wanderers are weighing up re-signing Eidur Gudjohnsen in a sensational development. 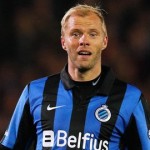 The Daily Mail reported that the Championship side are considering offering Gudjohnsen a contract. The 36-year-old has trained at the club since leaving Club Brugge.

Gudjohnsen took part in a first team training session with his former side last Monday and may have done enough to have earned a contract.

The Icelandic striker signed for Chelsea from the Lancashire side 14 years ago after playing at the Reebok Stadium between 1998 and 2000.

Gudjohnsen, who is now a free agent, has been training with the Championship side to maintain fitness but it now seems the frontman may have done enough to earn a permanent switch.