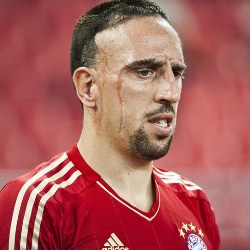 Franck Ribéry has been ruled out of the second leg of Bayern Munich’s Champions League tie with Arsenal on Wednesday with an ankle injury.

The France international suffered a ligament strain in his left ankle during his side’s 3-2 win over Fortuna Dusseldorf on Saturday. The midfielder Bastian Schweinsteiger and defender Jérôme Boateng, who are banned, will also miss the match at the Allianz Arena.

Bayern, who hold a 3-1 lead from the away leg, are also sweating on the fitness of Arjen Robben, who was not involved at the weekend because of a calf problem.

The German team have plenty of strength in depth, though, with the likes of Luiz Gustavo and Xherdan Shaqiri ready to come in.