Reports have emerged claiming that Thierry Henry could kickoff his coaching career away from Arsenal. 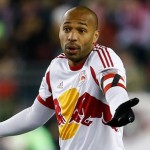 The Mirror reported that the French icon has been offered a route into coaching by his former France team-mate Willy Sagnol.

The Arsenal legend, 37, is set to retire after his New York Red Bulls lost in the MLS playoffs this weekend.

Henry claimed he has yet to take a decision over his future but he wants to stay in football.

And former France defender Sagnol, now the Bordeaux coach, said: “If he wants to come offer a hand with the attackers, he is very welcome.

‘With his goals and his behaviour, he was a pro from the beginning to end.”