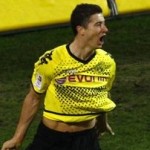 Borussia Dortmund moved a step closer to a successful defence of their Bundesliga title thanks to a win over their nearest rivals Bayern Munich.

Bayern had chances to open up the title race, but Arjen Robben’s penalty miss late on may prove costly as Dortmund edge closer to the title.