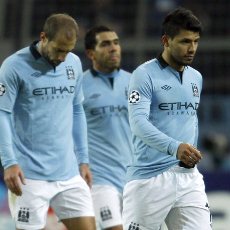 The Premier League champions already knew they could not progress from Group D but had been looking to secure a consolation place in the Europa League.

With Ajax losing at Real Madrid that possibility was open to them but it proved beyond Roberto Mancini’s men as Schieber hit the only goal of a subdued affair at the Westfalenstadion just before the hour.

In time, they may find the lack of European action assists them in their title defence but they must get the disappointment out of the system quickly before Sunday’s derby against Manchester United.

The result left City bottom of their group with just three points and without a win, one of the worst performances by an English side at this stage of the competition.