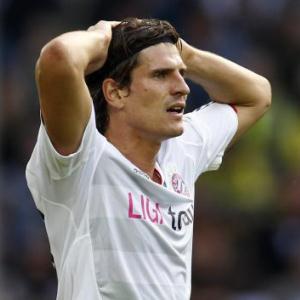 Borussia Dortmund kept up the chase of Mainz at the top of the Bundesliga with their fifth straight victory at the expense of Bayern Munich.

Dortmund went ahead in the 52nd minute thanks to a goal from Lucas Barrios and Nuri Sahin sealed the win eight minutes later from a free-kick.

The result takes Dortmund 10 points clear of Bayern and three behind leaders Mainz.

Mario Gomez could have had a hat-trick for Bayern in the first 45 minutes but he failed to justify coach Louis van Gaal’s decision to select him ahead of Miroslav Klose. Arsenal, Liverpool To Do Battle For Robert Lewandowski