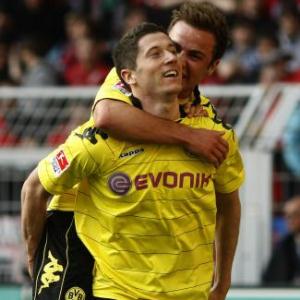 Borussia Dortmund took a huge step to claiming their seventh Bundesliga title by beating Freiburg at home and open an eight-point lead at the top of the table with four matches to play.

Just hours after top title contender Bayer Leverkusen lost 5-1 at Bayern Munich, Mario Gotze scored the opening goal for Dortmund in the 23rd minute and Robert Lewandowski made it 2-0 after 43 minutes.

Kevin Grosskreutz finished off Freiburg for good with his score in the 78th minute.

Dortmund extended their unbeaten streak to four games as they close in on their first league crown since the 2001-02 season.

Freiburg have collected just one victory in their last seven games to remain on 41 points in eighth place – seven points from a Europa League spot.