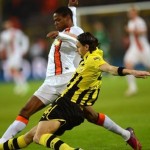 Mario Gotze enhanced his reputation as one of the rising stars of European football as Borussia Dortmund claimed a 3-0 win over Shakhtar Donetsk to book a place in the Champions League quarter-finals.
The German playmaker created the opener after half an hour when Felipe Santana rose majestically to thump his right-wing corner into the roof of the net.
And Gotze was on hand just six minutes later to double the advantage when he coolly diverted Robert Lewandowski’s low cross into the far corner.
Jakub B?aszczykowski then added a third on the hour after Andriy Pyatov fumbled a shot from distance.
It means the German champions progress into the last eight courtesy of a 5-2 success on aggregate as they continue to illustrate just why they are serious contenders for this year’s competition.