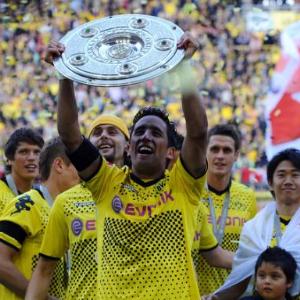 Eintracht Frankfurt were relegated to the second division after going down 3-1 at the new Bundesliga champions Borussia Dortmund today.

Sebastian Rode put Frankfurt in front and gave them hope of avoiding the drop early in the second half, but the home side turned the game around to win comfortably, even missing two penalties.

Lucas Barrios brought them level in the 68th minute before Robert Lewandowski put them in front just a few minutes later.

Barrios missed his second penalty of the afternoon in the 81st minute, after Marcel Titsch-Rivero was shown the red card for a professional foul, but he had the last word with the third goal in the last minute.