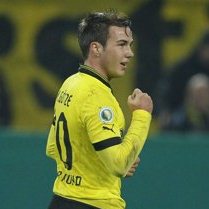 Mario Gotze scored a hat-trick as Borussia Dortmund cruised into the fourth round of the DFB-Pokal with a 5-1 thumping of Bundesliga rivals Hannover.

Gotze struck twice before half-time, either side of Jakub Blaszczykowski’s 18th-minute goal, to ensure a comfortable night for the hosts.

Mame Diouf pulled a goal back on 79 minutes but there was still time for Gotze to complete his treble with five minutes remaining.

Robert Lewandowski scored the fifth goal in injury time as a near full-strength Dortmund side went into the winter break on a high.

Dortmund and Bayern Munich were then drawn together in the pick of the quarter-final ties. Jurgen Klopp’s side memorably secured a 5-2 win in last season’s showpiece to complete a league and cup double.