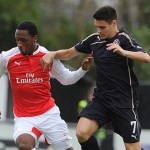 Reports have emerged claiming that Arsenal are in talks to sign Dinamo Zagreb starlet Josip Brekalo.

Brekalo, 17, has already broken into Dinamo Zagreb’s first team as the club push for the league title.

Dortmund are willing to pay £3.6million for Brekalo, who can play on either flank.

The Bundesliga outfit will reportedly make an initial approach for Brekalo in the summer.