It has been reported that Borussia Dortmund coach Jurgen Klopp is confident of keeping hold of Marco Reus. 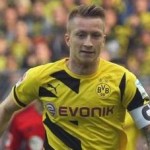 The German international midfielder was scouted by Arsenal representatives on the weekend in action against Bayer Leverkusen.

It’s also been revealed he visited London for talks with Arsenal at the end of last season before injury ruled him out of Germany’s World Cup campaign.

Klopp said last night: “On each of our players, where there’s always a bit of news, everything is already written. And they were already going everywhere.

“Nevertheless, not all are gone. I have a very good feeling that this will be the case with Marco Reus. He will still be playing for a while in Dortmund.”