It has been revealed that Borussia Dortmund are believed to be eyeing a possible loan pursuit for Adnan Januzaj. 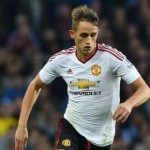 According to Sport1, the Bundesliga club are looking to sign the talented Belgian from Manchester United on a season-long loan.

It remains to be seen whether or not 20-year-old Januzaj is a part of Louis van Gaal’s plans for the 2015/16 despite the fact he started and scored the only goal in the 1-0 Premier League win over Aston Villa on Friday night.

Januzaj has already been linked with Sunderland and now it is understood that Dortmund, as well as Southampton, are showing interest.