Reports are out claiming that Borussia Dortmund fear losing Marco Reus after his buyout clause was revealed. 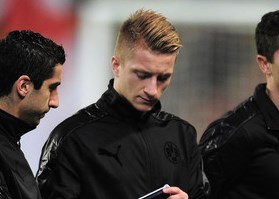 The Daily Star reported that Arsenal, Manchester City and Manchester United are all keen on the Germany international.

Dortmund’s executive Hans-Joachim Watzke confirmed a clause does exist in the midfielder’s contract.

“He could leave our club due to that.

“He is, however, the only player in our first-team squad that has such a contract clause.”