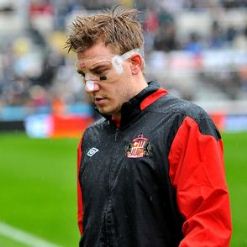 Arsenal are in talks with Borussia Dortmund over the sale of Nicklas Bendtner.

The Daily Mail reported that the German champions are understood to have inquired about striker Bendtner, who has returned to Arsenal after his loan spell at Sunderland.

It is said that the Danish international striker has declared he doesn’t see his future at Arsenal. Wenger Convinced Arsenal Can Achieve The Impossible At Barcelona