Reports are out claiming that Borussia Dortmund is ready to sell Ilkay Gundogan in the January transfer window. 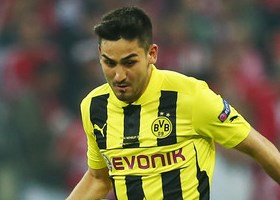 It has reported that Arsenal and Manchester United are on alert after BVB chief Hans-Joachim Watzke admitted star midfielder Gundogan could leave the club.

“It is our absolute desire that besides Robert Lewandowski no other regular player leaves the club,” Watzke said.

“Only in the case of Ilkay Gundogan, we do not yet know how it will turn out. We would love to extend (a contract) with him.”

According to the Daily Star claims that the 23 year old is yet to agree a new deal at Dortmund and interest is mounting on the £25m-rated ace with the Gunners and United leading the chase.