It has been reported that Borussia Dortmund are pushing Chelsea to drop their asking price for Romelu Lukaku. 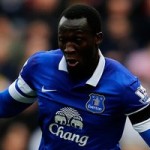 It is said that Chelsea boss Jose Mourinho is prepared to sell Lukaku this summer, despite his successful loan with Everton last season.

The Bundesliga side have already been in contact about a deal, but are disappointed with Chelsea’s €30 million valuation.

The German giants hope Chelsea drop their asking price as the summer rolls on, but have also opened talks with Torino for Ciro Immobile as an alternative.

Lukaku strengthened his reputation this week with a hat-trick for Belgium in their friendly win over Luxembourg.