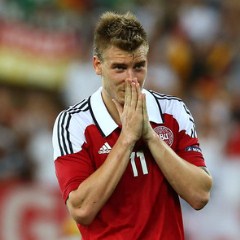 Reports have emerged that Borussia Dortmund are prepared to bid for Arsenal striker Nicklas Bendtner.

According to The People, the Danish international striker will be given a permanent escape from Arsenal by Borussia Dortmund.

It is said that Bendtner could move to Dortmund as a replacement for Manchester United and Chelsea target Robert Lewandowski.