It has been reported that Manchester United’s audacious last minute bid for Borussia Dortmund midfielder Ilkay Gundogan has been knocked back. 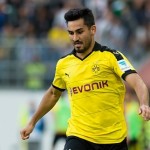 German publication Express.de is reporting United’s efforts to lure to Gundogan to Old Trafford have fallen on deaf ears following interest in the player earlier this summer.

It is understood Gundogan’s most likely destination, if he is to leave Dortmund, is United’s Premier League rivals Arsenal with the German international having been heavily linked with a move to the North London club.

Juventus and Bayern Munich are also said to be interested in the 24-year-old.