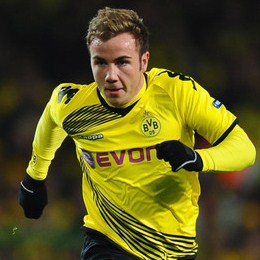 It has been revealed that Borussia Dortmund have already informed Arsenal to up their bid if they want Mario Gotze.

The Gunners were hoping to agree a £25m fee now and tie up the deal when the transfer window re-opens in January – but the Bundesliga champions have told them they will not accept anything less than £30m.

Arsene Wenger, keen to add quality to his midfield following the summer departures of Cesc Fabregas and Samir Nasri, is desperate to land one of the hottest talents in Europe and has made his move now in a bid to head off interest from Manchester United, Real Madrid and Bayern Munich. Arsene Wenger Delighted With The Potential Of Serge Gnabry