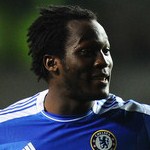 The 18-year old Belgium international striker has been given limited opportunities under Andre Villas-Boas since his summer move Anderlecht and it has been reported in Express that the Foals are keen to have him at Borussia-Park for the rest of the season.

If a short-term move was to occur, fellow Belgian Igor de Camargo believes that Lukaku would be a great addition to the Monchengladbach team.

“Romelu has a lot of competition at Chelsea, there are a lot of big names, so it is of course very difficult for any player trying to break through,” he said.

“He is a great guy, who plays with a lot of strength, an important player for the Belgian national team. An interesting, very good lad.”