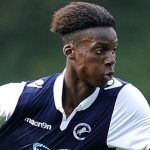 Reports are out claiming that Bournemouth are closing on a deal for Mikael Ndjoli.

The Daily Echo says the 18-year-old is believed to be close to agreeing terms with the Dorset club, having also attracted the attention of their Premier League rivals Arsenal and Crystal Palace.

Ndjoli is viewed as one for the future by Eddie Howe’s coaching staff and has been earmarked to link up with Stephen Purches’s under-21s.

The youngster progressed through the ranks at Millwall and earned some rave reviews for his displays in their under-18 and under-21 teams last season.

And although he was not offered a professional contract by the Lions, Ndjoli was highly thought of at the Den and several clubs had been tracking him.