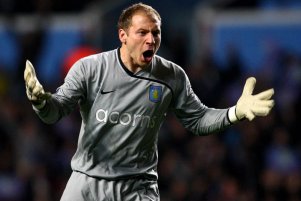 Aston Villa’s goalkeeping hero Brad Guzan has revealed that he is eyeing a place in the USA squad for next year’s World Cup in South Africa.

The 25-year old, who is currently understudy to fellow American Brad Friedel at Villa Park, showed what he is capable of when he saved the day for the Villains in the Carling Cup against Sunderland on Tuesday night.

Guzan was the man of the moment, making four penalty saves, one in regular time and three in the shootout, to help send his side through to the quarter-finals of the competition.

Now, the ex-Chivas USA shot-stopper is looking to first oust Friedel to be number one choice before setting his sights on Everton’s Tim Howard who is the current USA number one.

Although Guzan is vying for positions with both Friedel and Howard, he said he would definitely not have developed the way he has if it wasn’t for their experience and advice.