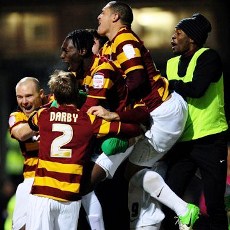 Arsenal suffered an embarrassment of epic proportions as they lost 3-2 on penalties after a 1-1 draw with Bradford, whose achievement should rank among football’s all-time giant-killing feats.

Phil Parkinson’s League Two players did not just beat Arsenal in this Capital One Cup quarter-final, for much of this match they outplayed Arsene Wenger’s woeful Gunners to reach a first ever semi-final.

The Arsenal skipper had earlier appeared to rescue the Gunners with a header three minutes from normal time to equalise Garry Thompson’s first-half volley.

But keeper Matt Duke defied the Premier League side to send the tie to a shoot-out – and glory for Bradford.

The defeat in sub-zero temperatures, and another failure in Arsenal’s seven-year quest for silverware, will chill the veins of Wenger as he contemplates the season so far.