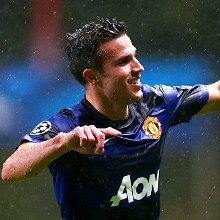 Late goals from Robin van Persie, Wayne Rooney and Javier Hernandez saw Manchester United come from behind to secure victory in Braga and with it their place in the last 16 of the Champions League.

A United side showing six changes from Saturday’s Premier League win over Arsenal struggled to get going in the first half and the hosts went in front shortly after the interval through a penalty from Alan.

However, as they have done so often this term after conceding the first goal, the Red Devils fought back to win thanks to substitute Van Persie’s 80th-minute effort from outside the box, a Rooney spot-kick five minutes later and Hernandez’s stoppage-time strike.

It leaves Group H leaders United on 12 points and guaranteed to go through as group winners, with Galatasaray and Cluj on four points each and Braga on three after four rounds of matches.