Reports are out claiming that Branislav Ivanovic’s priority is to sign a new deal with Chelsea. 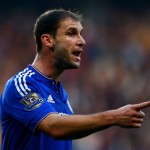 Ivanovic, who has recently fallen out of favour during the Blues’ dismal start to the season, was recently linked with a move to Inter Milan.

However, while refusing to rule out a move for his client to the San Siro, Zoran Krneta revealed his plans to remain at Stamford Bridge.

“Probably he will renew his deal with Chelsea,” Krneta told InterLive.it.

“Rumours about Inter? In football everything is possible.

“Anyway, the Nerazzurri could be interested to him for the summer market and not the winter one.”