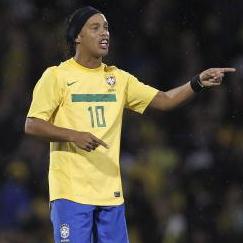 Brazil, with playmaker Ronaldinho back in the side, struggled to beat 10-man Ghana 1-0 in a friendly at Fulham’s Craven Cottage ground on Monday.

Leandro Damiao struck the only goal on the stroke of halftime, running on to a defence-splitting ball from Fernandinho and finding the corner of the net from a tight angle.

It was one of the few moments of invention from the former world champions, even with the crafty Ronaldinho returning for his first international appearance since November after showing excellent form for Brazilian title contenders Flamengo.

Ghana never threatened after having defender Daniel Opare sent off in the 32nd minute, a series of over exuberant challenges earning him repeated warnings from Mike Dean before the English referee ran out of patience.

The game started at a furious pace but the red card changed things, with Ghana retreating after halftime in a bid to keep Brazil at bay.

The match occasionally threatened to boil over as Dean produced seven yellow cards in addition to the two cautions received by Opare.

Ronaldinho, a World Cup winner in 2002, only came to the fore towards the end.