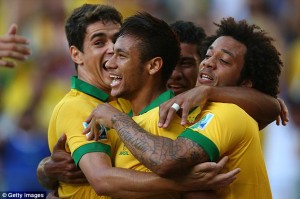 Neymar produced a commanding performance as Brazil secured their place in the Confederations Cup semi-finals with victory at the Estadio Castelao in Fortaleza.
This was not the dominant performance that some had expected but it was Brazil’s first competitive victory over Mexico in nine years and a third successive win under head coach Luiz Felipe Scolari.