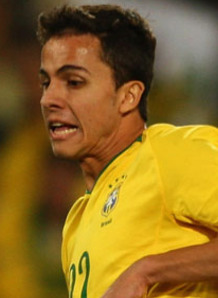 Striker Nilmar scored a hat-trick for a second-string Brazil team as the World Cup finalists beat Chile 4-2 at home in their qualifier.

Defeat for Chile, who pulled level at 2-2 through goals from striker Humberto Suazo, left Marcelo Bielsa’s team waiting to secure a place in the 2010 finals in South Africa.

Brazil had Felipe Melo sent off in the 52nd minute for a bad foul on striker Alexis Sanchez, but Sanchez himself was shown the red card in the 77th for dissent, his second bookable offence.

Chile, who could have qualified for their first finals since 1998, remain third in the South American group, four points ahead of fourth-placed Ecuador with two games remaining.

Nilmar, playing in the absence of the suspended Luis Fabiano and injured Robinho, opened the scoring after half an hour from Daniel Alves’s cross.

Julio Baptista, also set up by Alves, added the second in the 40th and Suazo pulled one back with a penalty just before halftime.

Nilmar completed his hat-trick with two goals in less than three minutes midway through the second half, both laid on by right back Maicon, after Suazo’s second brought Chile level in the 52nd. Howard : Ghana Will Be A Tough Team To Beat