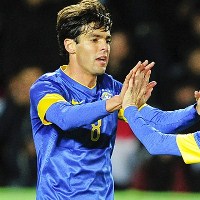 Kaka shone on his first international appearance for over two years as Brazil humbled Iraq in a friendly in Malmo, Sweden.

This was the Real Madrid attacking midfielder’s first match for his country since the 2010 World Cup, and he capped a fine performance by scoring the third goal after Chelsea’s Oscar had bagged a brace.

Hulk added the fourth on the hour mark while Neymar and Lucas completed the rout against their overmatched opponents, who are coached by former Brazil playmaker Zico.