It has been reported that Brazil World Cup hero Ronaldo has weighed into the Luis Suarez controversy. 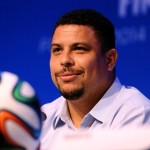 The Liverpool striker was charged by FIFA on Thursday afternoon for biting Italy defender Giorgio Chiellini, and has been banned for nine international matches, on top of a four months from all aspects of football.

The 37 year old said: “I know that bites hurt – my young kids used to bite me and I’d punish them.

“In my home punishment is called the dark room with the big bad wolf and for an adult I guess that’s the same thing with a four-month ban.”

Andrei Arshavin in Back To The Future – Video