It has been reported that Brazilian legend Cafu has slammed Liverpool striker Luis Suarez over his biting controversy. 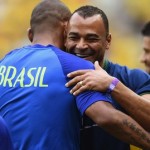 The Uruguay international striker was kicked out of the finals and hit with a four month ban from football worldwide by FIFA for sinking his teeth into the shoulder of Italian rival Giorgio Chiellini.

Cafu told the Daily Star: “Both (biting and racism) are as bad as each other. “It is a situation that should not take place on a football field.

“Racism and biting on a football pitch should be analysed and then sanctioned.

“These are two things that should never exist on a football field.”