According to Liverpool manager Brendan Rodgers, Arsenal are playing a game regarding their pursuit of Luis Suarez. 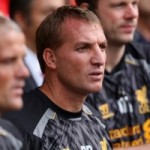 The Reds recently turned down a £40million + £1 bid for the Uruguay international striker with reports suggesting the Gunners will return with another proposal as they seek to lure him to North London.

Rodgers feels that Arsene Wenger’s club are trying to unsettle Suarez and hit out at the Gunners for the way they have gone about it.

“I’ve got to say I’ve always associated Arsenal as a club with class and so there was a wee bit of a game there,” he said.

“For us, it’s about moving on and doing our own work. There will come a point where they understand our position.

“Obviously they have an interest and they put that interest in with two bids which were nowhere near what the player is worth. That’s within their right.

“There is a market in football for players but from us the message is constant: we do not want to sell.”