It has been reported that Liverpool boss Brendan Rodgers is convinced of their chances facing Arsenal this weekend. 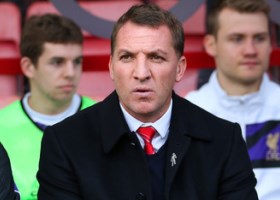 The Gunners have not lost at Anfield in the Barclays Premier League since March 2007 but Rodgers believes the confidence within his group means Liverpool approach a contest that could define their campaign with such confidence that they are not envisaging defeat.

Rodgers said : “I think because of the way we work and play we can sometimes get the most out of our opponents because they’ve got to be on the top of their game when they play against us,”.

“So we’re confident going into every game. I think the big change for us is we expect to win now. When I first came in the pressure to win was difficult for us. We expect it because of the club and the size of the club. But we were never that confident to consistently do it.

“But now because of the level and consistency of our work we go into every game expecting to win, and never more so than at Anfield. We see that belief and expectancy to win in our results. We’ll always respect every opponent and none more so than the leaders. But we’ll come into the game looking to perform.”