It has been reported that Brendan Rodgers was critical of his Liverpool side as they went down 2-1 to Manchester United on Sunday. 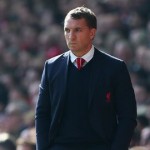 The Reds lost for the first time in the Premier League since mid-December after Juan Mata scored in the 14th and 59th minutes at Anfield.

?Daniel Sturridge gave the Reds some hope with his 69th-minute effort but Rodgers’ 10-man outfit – following Steven Gerrard’s red card in the 46th minute – were simply not up to scratch.

?”We were never in position. The second half the players showed why we have been on the run with the character and the resilience and we were still in it right to the end,” said Rodgers.

“They take great credit from that. The first half cost us more than the second.

“In that system you have to be able to press well and pass well and if you don’t do both elements of the game it becomes much more difficult for you.

“In the first half we weren’t passing it anything like well enough. We didn’t play well enough, you have to accept that.”?