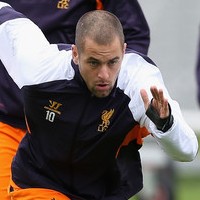 Liverpool boss Brendan Rodgers has insisted that he is not freezing out Joe Cole.

Ideally Liverpool would like to have Cole, in particular, and his supposed £100,000-a-week salary off the wage bill in order to free up cash for new signings while if money could be generated from other sales it would strengthen Rodgers’ hand in the transfer market.

“Joe is like every other player. I’ve have good communication with Joe and we speak regularly,” said the manager.

“He along with the other players are working hard to find their way into the team and Joe is like everyone else.

“But for us my concentration is purely on the squad we have.

“We know we need to reinforce the group, so that’s something that is ongoing.

“The priority is to get players into the building. Our squad is very small, very thin on the ground, and the players have performed admirably up until now.

“At this moment in time it really is about reinforcing the group rather than looking too much at people going the other way.” Liverpool To Take On AS Roma In The USA