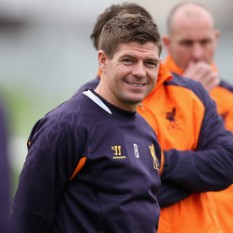 Brendan Rodgers insists that 32 year-old skipper Steven Gerrard has plenty of years ahead of him.

The Liverpool boss has heaped praise on the man who has been the Reds’ talisman for the best part of a decade.

The Anfield boss said: “I’ve watched him from the outside for a long time, but to actually work with him on a day to day basis, you realise he’s great player and an even better man.

“The way he conducts himself off the field, he has real old school values and ethics. He never has a lazy day. He comes in every day to work hard and is a real inspiration to the young players at the club.

“He’s a wonderful role model and he’s still got a few years left in him yet. He’s been outstanding, a real good man, and hopefully he can keep performing.” Rodgers Happy He Did Not Hook Liverpool Match-Winner Philippe Coutinho